Hetal Jhaveri: Sweetening the Lives and Occasions while Balancing Responsibilities

The ninth day of Navratri -‘Navami’ is dedicated to Goddess Sidhidatri. She is the one who possesses all the supernatural powers and meditative. She is mistress of all achievements and perfections.

And on the 9th day of Navratri, we bring to you an exclusive story of someone who has her hand in sweetening the tooth of more than 5000 regular clientele. A small-scale business owner from Ahmedabad who started with selling home-made thandai now runs a business making designer sweets, signature coffees and Sorbet flavours. We are here for an exclusive interview with Mrs. Hetal Jhaveri who owns and runs the business under her own name ‘Hetal’s Home Made’.

We seated at her place where she has made a compact office in veranda itself. When we grabbed our chairs for a tête-à-tête, freshly made sweets were tossed in our plate by a worker, whom she has retained successfully since she started off. In fact, the first thing we found was that all their workers are constant since the beginning. A few have added but none of them has left the place. Such is her charisma and care that attracts so many people, apart from her sweets of course. 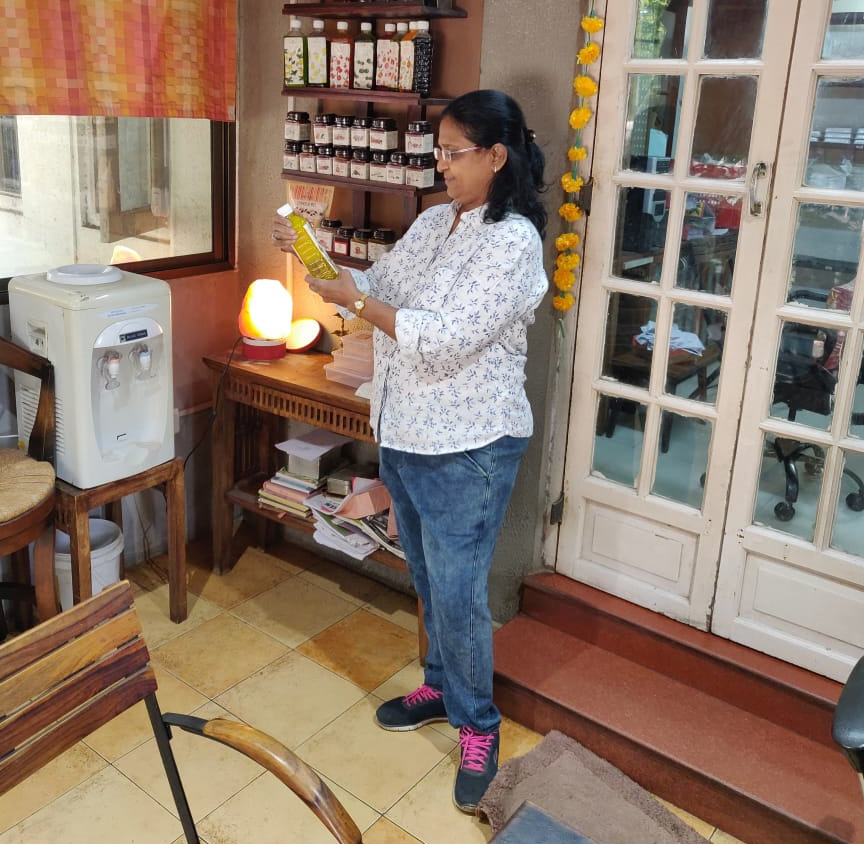 It all started with 2001 just after Gujarat experienced the earthquake at her old house. The initial idea Hetalben had was to be a helping hand to her mother-in-law. The offerings were limited to mocktail and sorbet flavours. But currently, there are plenty of other offerings under ‘Hetal’s homemade’ like a variety of coffees, sweets, sorbets, thandai all in all making a tally of 72 items.

Hetalben started with basic sweets for a couple of years when her clients insisted her to do so. With a bagful of order already placed, she started with 4 sweets. This was in 2003 when her business of flavoured drinks was growing consistently. But a year later, she speaks “Add 4 new items which were unique in itself. On the auspicious occasion of Raakhi, I make sure to introduce at least one new flavour in the sweet menu at a reasonable rate for the sisters.” And now after 15 years of being a sweet artisan, she has around 32 sweets on the menu card, all premiums, unique, and hand-made.

She is the firm believer of ‘customers first’ philosophy. And this is the reason why she never had to chase her clients. Her social circle and positive word of mouth did the trick. And that’s why, even till date, affluent Gujarati business fraternity not only in Ahmedabad, but worldwide. Such that the richest and the most successful business families with Guajrati roots have their order placed for occasions to her. But she humble claims her business as designer sweets for everyone and not only limited to affluent family clienteles she has.

On variety and style of sweets, she says “sweets should be different from the ones readily available in market. I take suggestions from clients to try and fit in their tastes in my new recipe.” Upon asking how did she get such ideas and be confident about her recipes, she says “I love cooking. And when people like the sweets I make, it elates my happiness and love for recipes that I implement. This is why I always ask for a feedback from clients. This helps me learn and suggests improvement in my efforts”. She believes that clients’ confidence in her is the biggest asset she has built over time.

One of her important learning element is indulging in experimentation with ingredients. This again she credits “my customers supports my experiments and give me feedback and since most of them are positive, I have started to gain trust in my innovation.”

Not so Sweet Sacrifices

Hetalben’s husband recalls the time when he called it a day at his business to join his wife. This is something unheard of since the issue of male ego can come to picture. But, looking at her dedication and passion, Monish stood by her, shattering the social stigma around joining the wife’s business and took charge of finance and marketing. This step from her husband was a major boost to her morale. The entire family stood by her, even her children understood. She recalls “my children understood me so much that they would have no complaints whatsoever with me or anything in the house. So whenever I am home, I try spending most of the time with them. Their sacrifices too should be paid off and such emotions from them became my strength. The unity of the entire family has helped me grow.”

Another thing that Hetalben encountered was to make the right business decisions. There were plenty of opportunities for her to mint money out of the hard earned success. Big companies came by to ask for franchisee options as well to sell their sweets, coffees, etc. She recalls “at that time it looked like a lucrative offer. It could have widened our distribution, helping us to penetrate more in the market. But the question was of quality. Her words were almost retention as she emphasizes, “I cannot allow anyone or anything to let my quality go on a toss. This is something that I cannot compromise with. And losing control of my own quality for any sum isn’t something that I fancy anyways.”

This holds true because retail outlets will require a certain amount of shelf life and to give that, she will have to blend in preservatives in her recipe which is not something she would give herself to. Contentment is the key as she remains contented with the business she does and happy clients she nurtures. The reputation of her brand is due to the quality which is as she says “biggest asset in the business”.

The difference between Businessman and a Businesswoman

When asked if she feels any difference being a businesswoman, considering that her husband too, ran a business once. The difference she felt was of the responsibility. And another interesting aspect she talks of is that “Males are accepted within the family and the society to be the one who can prioritise business or work and people are okay with it. The household responsibilities can be shared between mature couples but females have to ride two horses at once. I have to be as responsible in the house as I am as a businesswoman. To raise children and nurture a family is not about patriarchy or something to look down to. I love doing that part as well. I am fortunate to be a mother and get the chance to know my kids and family so well – inside out. But then woman nowadays are breaking the shackles of suppression that came from bread-winning man of the house. No one wants their man to ask about why she needs certain money and why she would want this or that.” 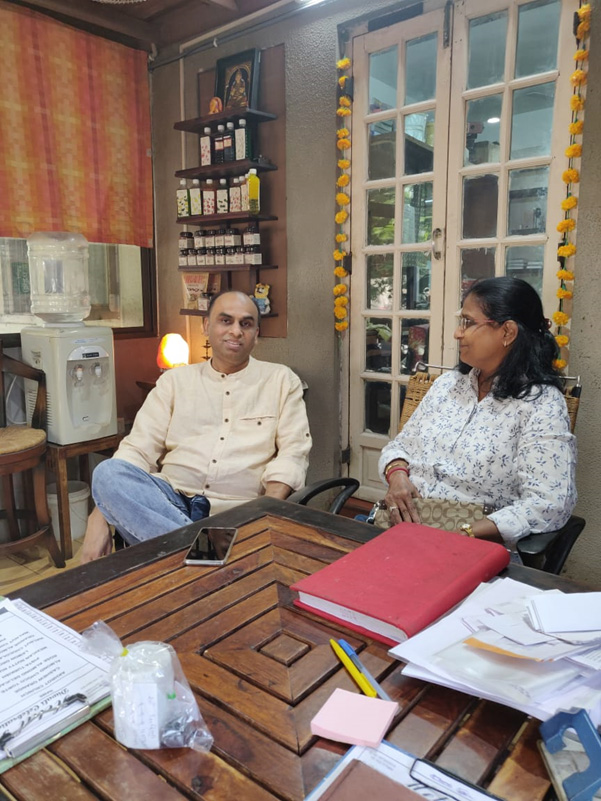 Even her husband agrees to the fact as he listens to her carefully and nods to the fact that husbands are not entitled to commitments and takes household stuff for granted. She never escaped any of the responsibilities and had been a perfect mother for her children, a wife for her husband and an entrepreneur with an optimistic outlook to life for her vendors and co-workers. She tells that it is an accepted harsh truth that you can’t escape. A woman cannot escape her house duties no matter what she does. The key lies in balancing the responsibilities and that she tells proudly “my husband helped me a lot in balancing this. I can’t imagine being this successful without his level of matured comprehension.”

She talks about how passion can give the energy to work and move ahead. For her, it was the decision, a choice she made to follow her passion. She firmly believes “you need to prepare for the best and the worst when you choose to follow your path.

It is my choice to follow this path, willingly so I have to go through, no matter what.” She juxtaposes how queen Jhansi fought, tying her child on the back just because she is a mother and she cannot blame anyone else for her choices.

“If you can come out of stress and observe closely, from within, how you can grow as a human and not just a female then it works wonder for you.” She thinks that when people are stuck in gender-based differences, comparisons are bound to happen. It is true at many levels since the idea is to be neutral, regardless of gender and stay balanced. The gender game should end and women need to accept that they have certain emotions and power that make them what they are while men have certain traits of their own. Even being a houseman is not demeaning as a social stature; women should go beyond these concepts and come out as individual winners keeping the socio-cultural gender stereotypes at bay.