What is beneficial? Trademark owned by Company or Promoter? 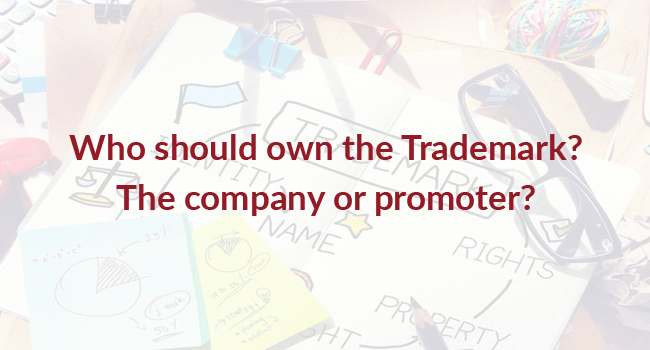 The Trademark is a valuable property for the person or entity putting efforts to build the brand name. Prime concern while filing the trademark registration application is the name of applicant who will claim the ownership of the proposed trademark. The question of ownership rights does not arise when a person is the sole party interested to build the goodwill in the brand name. However, the combined efforts of the group of person may lead to an issue regarding the ownership and pecuniary benefit out of the trademark. Here, we are discussing about who shall claim the ownership in case of a company or an LLP.

A Company or Limited Liability Partnership enjoys separate existence from its owners and therefore it can also hold the assets in its own name without interference of rights by owners or promoters. Nevertheless promoters hold highest beneficial interest for building the brand of the company or the LLP concerned.

The Trademark Registry before accepting the trademark applied for grant of registration certificate may ask the proprietor (claiming himself as owner in the application made) to furnish further documents to prove the ownership or goodwill built in the name of trademark applied for.If the applicant cannot provide any sufficient documents for the same, the registry on ground of dissatisfaction can abandon the application from proceeding on further stages of application.

If the product or services are produced and dealt by the company in its own name, the company can be the rightful owner of the trademark applied for as documental proofs can submitted only in the name of company and not its promoters or managers. Hence, considering this fact, the application is better to be made in name of Company or LLP, as the case may be.

What if the company assigns the rights of ownership to promoters or third parties?

If the ownership rights are held by a person other than company or LLP, in whose name goods or services covered under respective class of trademark is dealt, the third party will not be able to present any documental proof in own name. Here, the situation arises that the invoices and other contracts that relates to the trademark are made and presented in the name of the company and not promoters or other parties. Hence, all the goodwill built during the application stage or earlier can be claimed by the company only. While presenting all these documents at the time of hearing or other stage of trademark application, in lack of documental proof in name of third party may lead to cease the trademark application from further procedure i.e. the trademark applied can get abandon status.However, an agreement of the promoter or the third party with company will be able to rectify the issue raised.

Factors to be considered to claim ownership:

The owner of the trademark will held responsible for any matter related to Brand Name, trademark registration procedure or other allied matter. When one claims the ownership, the risk of the property also passes with it.