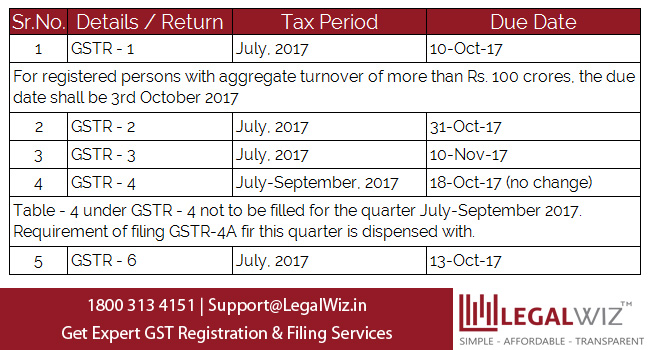 Recognising the glitches confronted by the taxpayers while filing the GST Return, the GST Council after a meeting which is held on Saturday, 11th September, 2017 has decided to set up the Ministerial group to look at the functioning of GSTIN in order to ensure smooth transition of GST.

The conclusion of meeting at Hyderabad results into changes of extended cut-off dates for filing the Return. This extension will act as great relief to the Registered Dealer who are trying to be compliant by submitting GSTR before deadlines but failed due to server failure and technical issues on GST Website due to heavy traffic.

Revised due dates for GSTR filings:

GSTR 3B: Council declares filing of simplified GSTR 3B till December, 2017.

Filing dates for the month of August will be declared at a later stage by the Ministry and Council.

In addition to revision of filing dates, the council announces revised Rate of GST for over 40 items. Further, announcements with regards to the rectification in the transition Form TRAN – 1, date to opt for the Composition Scheme being September 30, 2017 are made. Requisition of registration by for person liable for deducting TDS or collecting TCS has been laid commencing from 18th September, 2017.

The taxpayers are advisable to file the returns for the month of July on earlier instead of waiting for the last dates in order to avoid hassle free filing and elimination of errors while heavy traffic on last date.