Benefits to Register your Entity Under MSME Sector in India 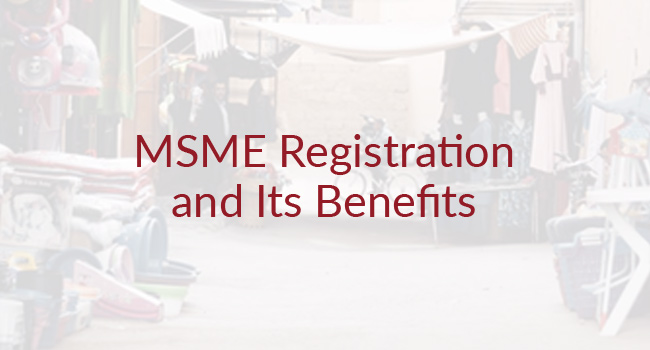 Micro, Small and Medium Enterprises are the backbone for the Indian Economy as it represents huge percentage of contribution by scattered into huge number of businessmen and taxpayers. Governments at Central Level or the State Level fund or aid the operations of such entities through various initiatives and schemes. In line with same object, Micro, Small & Medium Development Act was made in force back in year of 2006. Since establishment, the Government has increasingly participated to boost the growth of economy engine like enterprises.

Recently during the budget session and proximate period, many declarations are made that supports the long term growth of such entities. The major change brought was the amendment in base range of classification of the entities. Where earlier the classification was based on the investment in plant & machinery,now the base classification is proposed to be changed to annual turnover of the entity seeking the status.

Where the department has categorised the manufacturing and trading entities different from that of service providers under previous classification, the above mentioned classification is common for both categories of entities.

Also, the Budget announced for upcoming financial year 2018 has brought amendment in corporate tax structure for companies falling under category of MSME in conformation to above prescribed limits. The corporate tax rates for companies that reported the turnover up to 250 Crore in financial year 2016-17 are reduced to 25% by cutting slab of 5%. However, the said entities are not required to make online application for registration under MSME to fall under said tax slab. The benefit of tax rate reduction will be conveyed to almost 99% of the companies filing their tax returns at present.

Further, the budget has allowed major boost to MSME Sector through an allocation of Rs 3,794 Crore for credit support, capital and interest subsidy, and innovations in the sector.

The implementation of Goods & Service tax Laws has formalised the existence of such entities through their registration. However, the formalisation of such entities has affected adversely on the cash flow of the entities leading to face difficulties in repayment of the obligation towards Banks & Financial Institutions. Therefor as a measure of support to the entities, the Apex Bank of India has liberalised the criteria of the asset classification. For the Micro, Small & Medium Enterprises are registered under GST as on 31.01.2018, although the amount repayable to Banks & NBFC is overdue but not exceeding for a period of 180 days, it will be classified as Standard Assets in the books of such institutions. This allows the repayment period of 180 days to said entities.

The conditions laid down for availing above criteria says that the said enterprise shall also be accounted as Standard Assets as on 31st day of August, 2017.

As much as the management skills of owner are essential, sufficient capital infusion is also another key for take-off of any entity. To aid these financial needs of MSME sector in better way, the Government has profoundly participated to ease the fund raising through registered institutions such as SIDBI (Small Industries Development Bank of India) and State Financial Corporations.

Apart from establishment of such specialised banks, schemes such as PradhanMantri Mudra (Micro Units Development and Refinance Agency) Yojna are implemented. The Mudra Scheme has been launched in April, 2015 that aids small businesses with loans ranging from Rs 50,000 to Rs 10 Lakh for a period of 5 – 7 years.

Additionally, recognition of MSME is also granted by commercial banks that deploys special scheme for sanctioning the loan as priority sector lending with lower rate of interest as the banks are directed by RBI towards lending certain percentage of funds to such sectors. Banks are most likely to provide the benefits on furnishing the memorandum after MSME online registration.

Demonetisation and implementation of Goods and Service Tax Laws have resulted in creation of huge database of such small scale businesses those were not formalised earlier. The said database will help the Government to look into betterment of the financial needs of the entities.

Online sanction of loans is also planned through Trade Electronic Receivable Discounting System (TReDS) platform. The said platform will be linked with GST Network, which will help increasing the credit availability from public sector banks along with enhancement of credibility of such platforms.

Putting altogether, upgradation of small and medium sized sectors is proactively taken care by the Government. To yield the benefits from above described certain schemes and aids, an online SSI Registration application may be required. For the purpose of registration under MSME, the entities shall fall within the turnover criteria as prescribed above along with the specified categories of the activities prescribed under the list laid. Certain categories of activities are excluded for the purpose of online registration under MSME. These categories also include the trading of all types of goods for wholesale & retails purpose and activities of extraterritorial organization and bodies. Further, certain activities falling under crop, animal production, hunting and related activities are also excluded through notification dated 27.06.2017.