Rajika Kacheria: Cosmetologist with a zest for women empowerment 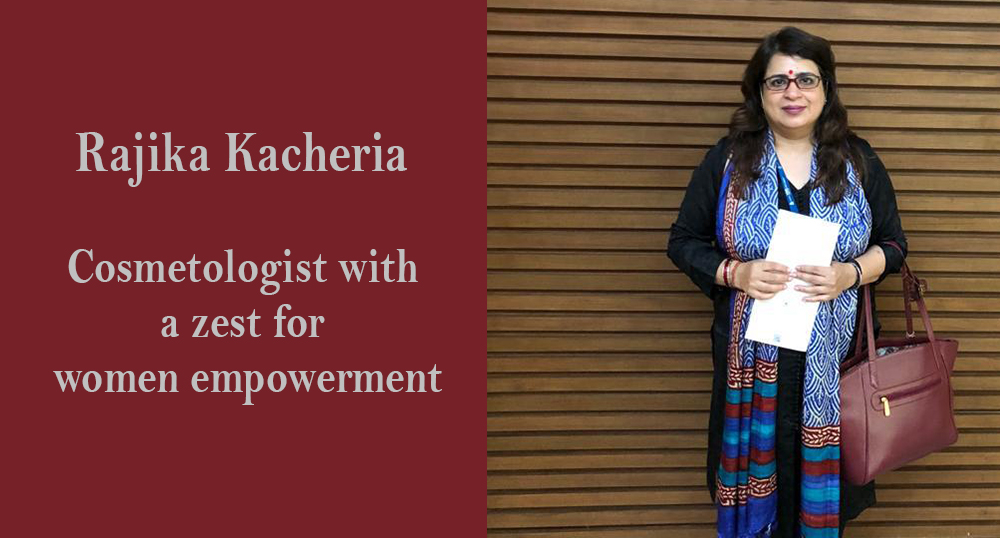 Continuing our legacy of celebrating the feminine spirit this Navaratri, we at LegalWiz.in are proud to profile Rajika Kacheria – a social & political activist who is professionally a Cosmetologist and wellness coac; actively involved in empowering women.

Rajika Kacheria, born and brought up as a single child, credits her father and family for her ability to adapt to change. That’s where the strength comes from – as she puts up, “being the girl and also the boy of the house.” Her father is a retired military person who preferred taking the family along to his postings. It prepared her to make new friends and get acquainted with environments from very young age.

Being dynamic from childhood itself has helped her to be what she is today. Rajika, after changing multiple schools, completed her final education from Hyderabad. This early life exploration also made her more gender-neutral as she goes on to say “I believe in Ardhanareshwara, where a man and a woman is equal. The woman is not more important than a man and nor the other way round.”

Once married, she moved to her husband’s house which again introduced her to a new place, new people, and new culture. As she says “It took me a lot of hard work and patience to establish myself and earn the name and niche that I have now.” I took a while to establish myself and and also work for myself. As she opines, marriage does involve compromise for both the genders involved. But it is more for women as she recalls the Puranas and tells that “even Parvati was called Annapurna – the giver of food. But then, men can change nappies. They cannot give birth to a child. That is the reason why women are called Janani. This is in her ability to be loving to her family and binding the family.”

Asked about the hardships in starting a business, she tells us how it all started. She says “I started a small grooming parlour in my convertible bedroom which was like a studio during the day. But then setting it up means getting capital. Further, I took a loan rather than borrowing from my family. This choice was deliberate because it is about my journey. And maybe I’d have eased out thinking it is family’s money. A formal loan means a certain amount of responsibility and commitment to work.” She enjoys the pleasure of being a self-made woman and it always about an individual’s journey from and within as she fondly quotes Bhagwad Gita, “…attachments with detachment” and that is the mentality she carries  – someone who stay unattached to the stature and position she has today.

Scaling up the Business

Rajika has been in the business now for around 29 years and still going strong. And upon asking the key to such success, she emphasized, “Sheer hard work. If a family liked my work they would go and recommend my grooming services to others. And the others would do the same. Again, there was no social media networking. This was only by word of mouth that people admired my work.”

Rajika has been in the business now for around 29 years and still going strong. And upon asking the key to such success, she emphasized, “Sheer hard work. If a family liked my work they would go and recommend my grooming services to others. And the others would do the same. Again, there was no social media networking. This was only by word of mouth that people admired my work.”

Another reason she gives us is that of “never cheat in your work and stay true to your clients. It is easy to cheat people in the wellness business without even them realising it. I stayed to true to myself and my work, chipped in my share of perseverance and passion to be where I am now.” She also stresses on being truthful to clients can eventually pay off. Rajika reaffirms on how she keeps her treatments personalized and that maintaining relationships with the client, even after the change of generation reflects the number of trust people put on her. One way to scale up the business these days is to “connect to each client and understand their issues thoroughly.” Also, she is a firm believer in keeping the team small – not lose the personal touch.

Rajika Kacheria is a social and political activist who likes to be involved at grassroots levels and understand the problems that women face and work for their upliftment. In such situations, she takes and considers both the sides of the story before taking action. Crediting her husband to give her the space she says, “My husband is very kind and has given me a lot of space. He has always supported me all through my thick and thin.” Though she doesn’t consider anything as a Eureka moment as such.

But in that struggle and the journey of life so far, Rajika boldly acknowledges, “Working with the current Prime Minister, Narendra Modi Ji has helped me understand the human being.” Post which she continues how she worked closely with him when being in the Information Technology activities of Gujarat. She was a part of a lot of activities when Mr Narendra Modi’s staff was transiting from being a Chief Minister to Prime Minister. Whatever she has learnt from Modiji will be as she puts up “life lessons which will remain very close to my heart.” She also tells how he as a leader treated each person’s individuality and telling others about their mistakes personally rather than firing them in front of other people. She was active in the grass-root level of politics in Gujarat from 2007 to 2014. She also stresses that in India, “Being a woman in politics is not easy. Because you are dealing with a huge amount of discrepancies.”

Currently, she is associated with the Bharatiya Janata Party and women’s wing of RSS. Along with that, she is actively involved with ATCC (Ahmedabad Traffic Consultative Committee) and Friends of Tribal Association in a leadership role.

When it comes to family, she considers practising mindfulness through meditation. That is something as she puts up “so when I am with them, I remain completely with them. I am in the moment 100% wherever I am. I really spend qualitative time with family rather than quantitative time.” Also, she affirms that “children should be given space when they are growing up. I can only give her the support, they are the ones who will decide where they want to go.”

“Nothing is impossible”, she continues, “We don’t want to go to the moon or get the stars. But definitely, to become one (moon or star), to reach there, you have to work extremely hard. And yes, always be truthful to yourself and society. And the third is to practice attachment with detachment.”

She considers attachments as the root cause of issues that women faces in the family and business wherein it all boils down to, “me, mine and I.” And she exclaims that this has adverse consequences as they tend to forget “that there is us also.” This us could be family, business/clients, or even the society in general. As an activist, she urges youth to “not use plastic. Not cut the trees. And be respectful of nature.”